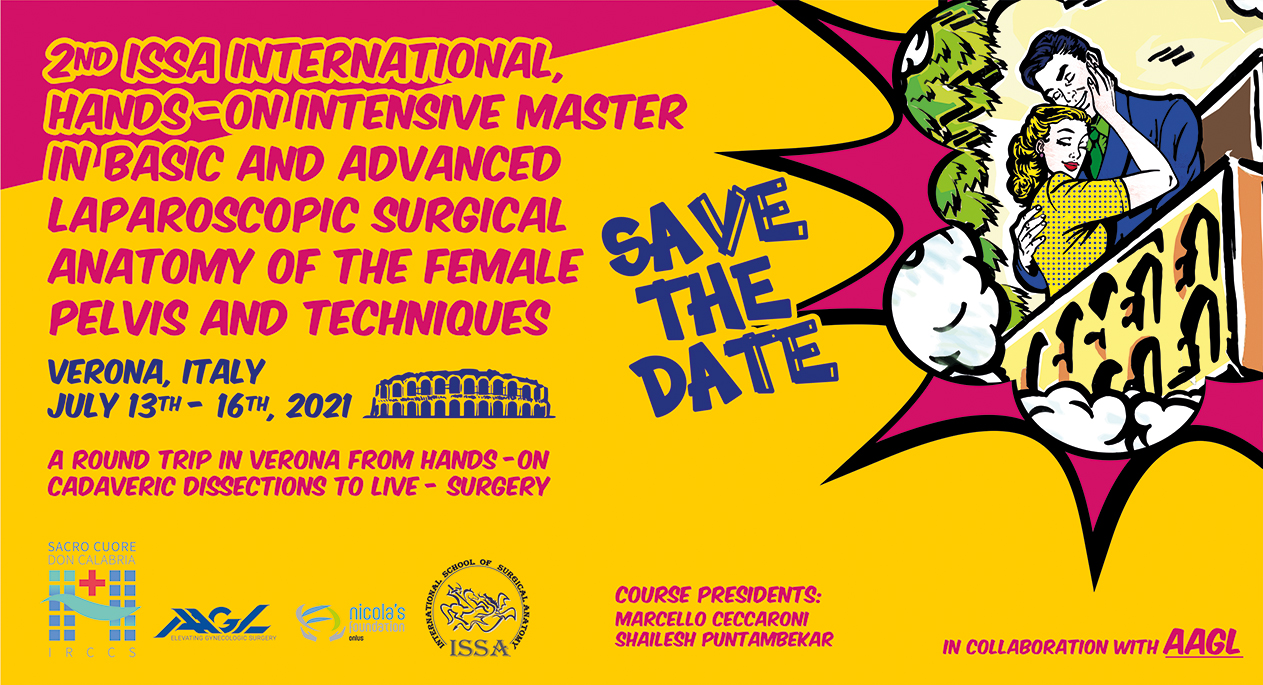 A round trip in Verona
from Hands -on cadaveric dissections to live – surgery
HYBRID EDITION Live from Verona, Italy + Digital Event

We invite you to join us at the “2nd ISSA International, Hands-On Intensive Master in Basic and Advanced Laparoscopic Surgical Anatomy of the Female Pelvis and Techniques” a Hybrid Live and Digital Event in collaboration with the AAGL (Elevating Gynecologic Surgery).
We are delighted to welcome you in the beautiful city of Verona, in the north-eastern part of Italy, lying on the borders of the beautiful Garda lake.
Verona is one of the most outstanding cities in the world, with more of two thousand years of history. Considered as the city of love, it is the place where William Shakespeare set his masterpiece “Romeo and Juliet”. This little gem of a city of art and history shines for the presence of many beautiful ancient monuments and buildings, among which the Arena, a Roman Colosseum hosting a very famous summer Opera Festival. The neck of the city is covered by a scarf of beautiful hills and valleys overcrowded by grapevine trees, defining the famous wine area called “Valpolicella”, producing some of the finest type of wines known all over the world, such as the
Amarone, Ripasso, Valpolicella and Recioto. This four-days hands-on intensive course is addressed to pelvic surgeons interested in
enjoying the cadaveric model to deepen their knowledge in surgical anatomy, which is traditionally the golden rule of the ISSA School. The course is designed for gynecologists, general surgeons, urologists and pelvic surgeons who perform basic, intermediate and difficult laparoscopic surgery. It will provide a step-by-step surgical approach to the pelvic viscera and to the different surgically-treatable diseases affecting them, with a particular focus on benign disease, deep infiltrating endometriosis and gynecologic malignancies. A common distortion and infiltration of the pelvic organs may be encountered not only in a gynecological cancer and deep infiltrating endometriosis, but also in simple procedures and the only safe way to restore anatomy and achieve radicality is to follow simple anatomical rules.
Each day, live-surgery sessions will alternate with cadaveric hands-on dissections.
Your “spectator” part of the course will be a sparkling mix of: theoretical presentations and keynote lectures brought by an international faculty of stakeholders and key-opinion leaders, keynote cadaveric dissections held by Dr. Marcello Ceccaroni and
Dr. Shailesh Puntambekar, live-surgeries broadcasted online and to the Congress Venue from the “IRCCS Sacro Cuore Don Calabria Hospital” operating rooms and performed by Dr. Ceccaroni, Dr. Puntambekar and other Masters of Surgery, together with their
assistants with the help of a multi-disciplinary team.
For the “live-surgery” sessions, which will be casted every morning, a large set of surgical operations for different pathologies will be shown, from the simple laparoscopic hysterectomy to the “Pune Technique” radical hysterectomy and the “Negrar Method”
for eradication of deep infiltrating endometriosis with parametrial and rectal resection.

Particular focus will be put on the correct employment of the nerve-sparing principles both, in oncologic and benign disease, and on the correct use of energy and techniques.
In fact, all the dissections will be performed under the eye of a “neurogynecologic” approach.
The theoretical lessons will firstly focus on anatomical principles and then on the single pathologies and their surgical treatment options with wide use of surgical movies. In addition, a real room and a Webspace will be available for pre-recorded and on-demand
surgical videos from real Masters of surgery from all over the world and a permanent “Continuous Video Session”.
The keynote cadaveric dissections will introduce and give you a “syllabus” for the following hands-on dissection, showing how to find out and dissect the pelvic spaces on these peculiar and very realistic specimens.
Your “actor” part of the course, which will be performed with the help of the Faculty tutors, will provide a hands-on tutorial on cadaveric specimen, using laparoscopic instrumentation and 3D technology.
Main learning objectives will be: to recognize the anatomical landmarks and major pelvic structures pertinent to gynecologic laparoscopy and retroperitoneal dissection, to apply laparoscopic surgical techniques to enter and expose the avascular spaces of the pelvis, parametrial ligaments, nerves and pelvic vascular system and their relations with the ureter and intraperitoneal structures, to illustrate the step-by step dissection of the pelvic viscera and pelvic-nerves related to the different gynecological procedures and
nerve-sparing techniques for gynecologic cancers and endometriosis surgery.
The last day of the course will provide a cadaveric hands-on masterclass on laparoscopic suturing techniques, introduced by theoretical and video lessons showing the basic principles of endoscopic suturing and knotting. A pelvic trainer session will follow where the candidates will be guided by the tutors in suturing simple (i.e. vaginal cuff, myometrial defect after myomectomy) and complex (i.e. vescical and ureteral resections and injuries, bowel vascular injuries) wounds on the cadaveric specimen.
A social dinner in an ancient and fascinating venue will be offered to all of the in-person participants, in order to give a taste of the Italian food, history and lifestyle, in order to come back to our good old habits.
We look forward to sharing this inspiring, memorable and highly educational artistic, musical, anatomical and surgical experience with you!
We wait for you and remember: If you love someone bring them to Verona!